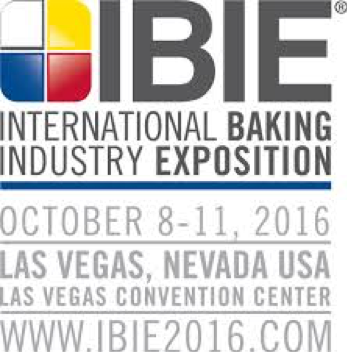 The International Baking Industry Exposition earlier this month was a lively, friendly affair.

Although it didn’t match the enormity of last year’s IBA in Munich (which had over 70,000 visitors), IBIE 2016 saw 23,000 industry-types pack into the Las Vegas Convention Centre. This was a near 10% increase on the last time the triennial conference was held in 2013, showing that interest in our sector is growing on both sides of the Atlantic.

Our friends at the Retail Bakers of America were responsible for a fair amount of the 90-plus education sessions at the show. It was great to meet up again with their president, Beth Fahey, who came over to the CBA’s conference in Manchester earlier this year, and also to meet RBA operations manger Bernadette Shanahan-Haas.

I also got to make the acquaintance of Robb MacKie, the American Bakers Association’s genial CEO and to share a beer with John Unrein, editor of both Bake and Instore magazines. Plus I met a lot of American bakers. A special shout out to Dennis Stanton from Chicago’s Swedish Bakery, in particular, for his valuable insights into the domestic scene.

On the surface, the North American bakery market may not look too dissimilar to our own.

For example, at a show like IBIE you meet a good many members of pan-generational family firms, just as you would in the UK. But, as with many transatlantic comparisons, American terminology understates some of the big difference between the two markets.

Take wholesale baking. Because of the size of the market (and, I suppose, the economies of scale it offers) it is common to find that a baker that describes themselves as a “craft wholesaler” is actually a Warburtons-sized operation running huge industrial-scale plants across several states.

On the other hand, America seems to be a place where the single shop retailer can really thrive. These “mom and pop” bakeries often incorporate cafes and are well-known local institutions in their own right. They major on innovation and, from a British perspective, generate extremely enviable turnovers.

Specialism is also a key trend among American retail bakers right now, with the increasing appearance of outfits that focus on just one niche whether it be cupcakes, pastries or celebration cakes.

There is definitely more emphasis on the sweet treat side of bakery rather than on savouries. Doughnuts, cakes and fruit pies are big business. That’s not to say that Americans are not into their artisanal sourdough loaves. They are, it’s just that this side of things seems to make less noise than in the GBBO-obsessed UK.

Where things are very similar between the US and the UK is the increasing trend towards what they call “clean label” foods. This is much the same as our organic and “free-from” movements and driven by the same kind health-consciousness from consumers.

Another similarity is that North American bakers tend to be concerned about compliance. While it may be easy to think of the U.S. as playing catch-up in terms of legislation compared to EU countries, it is worth remembering that there are over 3,000 state, local, and tribal government agencies involved in American food safety, so it’s a complex issue.

This complexity has been increased with 2011’s Food Safety Modernization Act (FSMA). A good example of this would seem to be the large grey area left by exemptions for food manufacturers that make less than $500,000 a year profit and sell most of their products directly to consumers in the same state and within a 400-mile radius.

It was good to have some solid Cybake connections in Las Vegas. For instance, I got the opportunity to meet up with the U.S. wing of our German partner Toolbox Software which is flourishing with its pick and track solutions. I also got to hang out with our American partners, SG Systems.

SG’s weighing and traceability experts had a sizeable and popular stand and it’s always good to see your colleagues racking up some healthy conference sales. Quite apart from the business side of things, though, I must thank SG Systems’ president Stuart Hunt and all his team at the show (pictured below).

Such hospitality is not only lovely to have, it gives an outsider the chance to get a real perspective of what is going on around him – even in surroundings as surreal as those of Sin City.